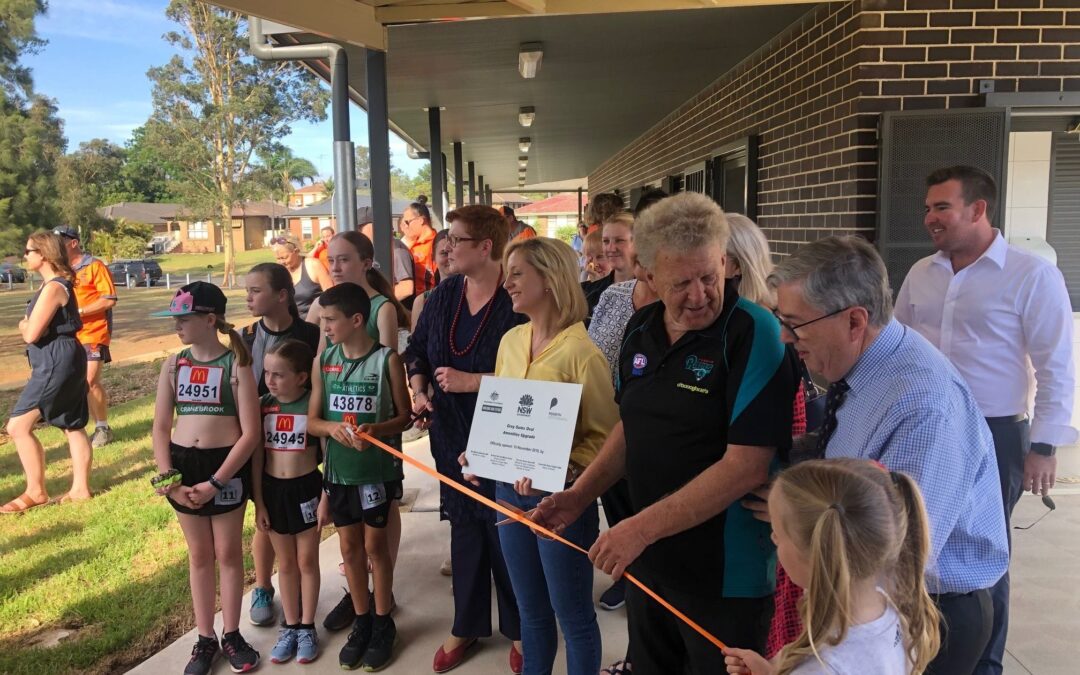 Families and sporting groups will now be able to enjoy an improved Greygums Oval thanks to a $1 million funding boost from the Federal and State Government, and Penrith City Council.
The official opening was marked by Liberal Senator for Western Sydney, Senator the Hon Marise Payne, the Member for Lindsay, Melissa McIntosh MP, State Member for Penrith, the Hon Stuart Ayres MP, Penrith Mayor Ross Fowler, and Director of the Penrith Rams, Greg Corless.
Liberal Senator for Western Sydney, Senator the Hon Marise Payne, said: “Having worked on the delivery of this project since 2016, I am delighted that the long-awaited upgrades to the new amenities block are now complete. Developing sport at a grassroots level is definitely about having the right infrastructure in place as it supports our sportsmen and women as well as tireless club volunteers, so this is a great outcome.”
The Federal Member for Lindsay, Melissa McIntosh MP has welcomed the upgrades and has congratulated all levels of government on collaborating to deliver this project.
“This is just one of the many commitments from the Morrison Government to improve access to our local sporting facilities and encourage our kids and families to lead healthier lifestyles. This upgrade includes a new canteen, accessible toilets and three new storage buildings for Greygums Oval which is an important local sporting field in our community. The Morrison Government has made this $750,000 investment under the Community Development Program and we’re getting on with the job of delivering these important projects in Lindsay,” said Ms McIntosh.
Stuart Ayres MP, Member for Penrith said over 500 participants from AFL, Little Athletics, school activity groups and outdoor fitness classes use Greygums Oval each week.
“This upgrade ensures sports players and volunteers have a modern and safe environment that will support them into the future,”
“The NSW Government’s strong economic management ensures we have the ability to continue to invest and support local projects like this.” said Stuart Ayres.
Penrith Mayor Ross Fowler thanked the Australian and NSW Governments for their significant investment in the facility saying it was money well spent.
“Grey Gums Oval is a much loved and well used space, and now, with a new canteen, the clubhouse and increased storage, it has even more to offer local clubs and visitors, another great result for the community through all three levels of Government working together.” Cr Fowler said.
“The upgrade has been much anticipated by the main user groups at Grey Gums – the Penrith Rams, Penrith Giants AFL clubs and the Cranebrook Little Athletics Club. The clubhouse is an excellent addition here at Grey Gums and, of course, you can’t underestimate the appeal of a new canteen – for athletes and supporters alike.”
Director of the Penrith Rams, Mr Greg Corless, welcomed the completion of the upgrade.
“We were thrilled with the generous contribution from the Morrison Government,”
“This upgrade will be of great benefit not only to our players and volunteers, but to the broader Penrith community all year round.
“We really appreciated the efforts of Senator Payne in getting this project off the ground all those years ago and was really lovely that she was able to join with us to celebrate its completion.” Mr Corless said.
Source: Melissa McIntosh MP, Federal Member for Lindsay
Posted: 20 Nov 2019